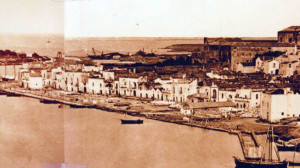 The port of Brindisi is situated on the Adriatic coast. Its port is a hub of vibrant activity, in particular with vessels coming from the Eastern parts of the Mediterranean, such as Albania, Greece, Turkey and former Yugoslavia.

Over 50 years ago, a Maltese vessel, named MariaBella, was once involved in an accident and aided by the Capitaneria di Porto of Brindisi. The documentation is to be found at the Brindisi Archivio di Stato, Classificazione VIII-1, Busta 14, fascicolo 89. The original telegram from Otranto to the Brindisi Capitaneria di Porto, with the Maltese vessel’s request for help, proves that the nationality of the Mariabella was originally unknown (“Nazionalità non identificata”), and a bit later even considered to be German.

On 21st January 1967, the Maltese vessel MariaBella was grounded (incagliata) off the coast of San Cataldo di Lecce. The MariaBella was a 500 ton vessel that had been built in Holland by Martens Hork in 1957 and had a 1958 engine installed by Appingedam, Holland.

It was originally named Rudolf F. The vessel belonged to the Maltese company, Mediterranean Trading Shipping Co., Ltd. and it had been bought through grants and loans obtained by the company from the Maltese government’s 1962 “Aid to the Industries Scheme”

The MariaBella had begun its voyage in Split, former Jugoslavia, on 21st January 1967, headed for Malta. It was carrying cement ad cement tubes, weighing a total of 858 tons, and was insured with Bray & Gibbs in London.

Captain of the MariaBella was George E. Mackay, from Lancashire, who had 27 years of experience captaining vessels of such type. The crew consisted in a total of 10 persons, including 4 officers and 6 other crew members. 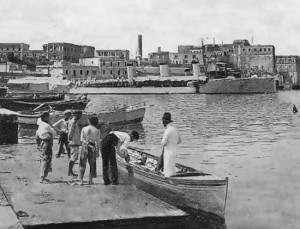 The MariaBella was grounded one mile south east of San Cataldo at 9.50 p.m. on 21st January. The reason given for such “incaglio” was the confusion between the Otranto lighthouse and the San Cataldo one, which were only 20 miles away from each other, but emitted light signals at the same interval of time (“uguale periodicità di luce”). At that time, visibility was in a very poor state because of the fog on land (“nebbia e foschia verso terra”).

The crew must have combated for over a day trying to get “disincagliati”, because it was only at 2 a.m. of the 23rd January that Captain Mackay sent out a radio request for help. At 5 a.m. in the morning of this day, the “motopeschereggio” Orsa Maggiore was sent out to the place of the accident and it stayed there until the arrival of the tug-boat (rimorchiatore) Ardimentoso, which took in hand the rescue operations.

More or less a month later, on 1st March 1967, the captain of the Orsa Maggiore, Michele Iacoviello, sent a registered letter to the Brindisi Capitaneria di Porto asking to be reimbursed the expenses he and his men had sustained in going out to help the Maltese Maria Bella.

Iacoviello pointed out that his crew were employed with a contract “alla parte” and they had therefore lost a whole day’s work and income. It was only just that they should be reimbursed such losses. 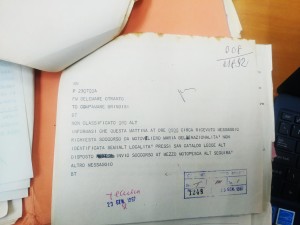 All “apparecchiature” on board the MariaBella were on 25th January 1967 estimated to be in very good condition: “Efficiente”, “Buone”, “Perfette condizioni” were the adjectives used by Michele Miggiano, «titolare dell’Agenzia Marittima POSEIDONE, la quale rappresenta la motonave MARIABELLA». 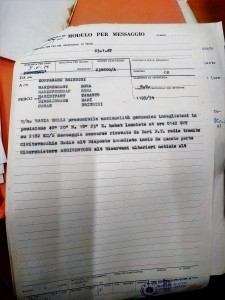 The towing operations took around a day and it was only at 2 a.m. of the 24th of January 1967 that the Mariabella first was “disincagliata” with the help of the rimorchiatore “Ardimentoso” and then, at around 11 a.m., entered Brindisi port. All this is confirmed in the report sent to the Maltese Embassy in Rome by the Comandante in seconda – Colonnello di Porto, Domencio Menna, who also certified that no damage to ship, engine and crew had been registered. A day after entering port, on 25th January 1967, Captain Mackay registered a Sea Protest, with the Brindisi law courts

On the same day, the Captain of the rimorchiatore Ardimentoso, Girolamo Carabellese, presented to the Comandante in Seconda of the Brindisi Capitaneria, Domenico Menna, a copy of his Giornale di Bordo, with all the details concerning the operations in which his vessel was involved, when helping out the MariaBella. The Diario di Bordo starts off at 2.20 a.m. of the 23rd January, when the request for help was received by telegraph and ends at 11.50 a.m. on the 24th of January, when the Mariabella was safely towed into Brindisi harbour and “ormeggiata” at the Sciabiche wharf. 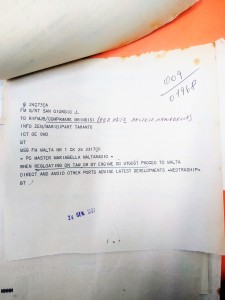 To ensure that any expenses were to be recouped, Comandante Carabellese ends his report with the words «Nell’interesse del mio armatore, faccio riserva per tutti i danni e diritti conseguenti all’operazione».

As in various other instances in life, money and expenses seem to be a major concern here. Indeed, in the only correspondence coming from Malta, a telegram sent by the MariaBella mother company to the Brindisi Capitaneria on 24th January, for the attention of Captain Mackay, the need to avoid extra expenses is clearly highlighted in the words: «When regloating (sic. refloating) on taw (sic. tow) or by engime (sic. Engine) do utgost (sic. Utmost) proced to Malta direct and avoid other ports advise latest developments =MEDTRASHIP=».

What the final bill for all concerned entailed……is nowhere to be found in the Archives file. But the correspondence contained in the Brindisi Archives files highlight the fact that such salvage operations in the Mediterranean, whilst showing the commendable collaboration between authorities and vessels of different nations, were also a very costly affair, with expenses which nobody wanted to bear.

Such episode makes me reflect on the importance of sea transport for the human race’s survival … since time immememorial. The Mediterranean sea-route has provided a continuous life-line for the people in Southern Europe, Africa and the Middle East. This route becomes ever more important today on the background of the tragedy happening in Ukraine, following the invasion by Putin’s forces.

Millions of tonnes of grain lie languishing in various ports of the Northern European country as other millions of human beings in Africa, and beyond, risk being deprived of their staple food, and of eventual starvation, through the blockage of the sea routes that normally provided a safe passage for these goods.

One hopes that reason, together with human pietas, prevail … and quickly. May the collaboration by the Brindisi capitaneria and the Maltese vessel crew of 55 years ago serve as a positive example to the political players who today have the power to decide.