Through the TV screen 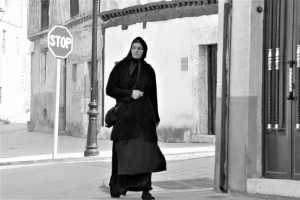 “Mommy don’t go”, he moans softly against her ear, passing his tiny, plumb hands through the woman’s hair. They are soft and long, when they’re not covered by the ḥijāb she always wears.

Her mother taught him it is a sign of respect for Allah.

“He’s the only one who always looks at us from up above, sweetheart. And always watches out for us”, his mother responded.

His Mommy, Abir, always has that way of replying the questions without really giving a comprehensible answer, that left the boy more confused than before asking.

Now she smiles kindly, caressing her child’s face. “I have to bring Nanny to the hospital for her monthly control, honey”.

He knows Nanny only lives two streets away, and can’t drive on her own because she’s too old. At least that’s what Mommy always says. They often go to her place on Saturdays Friday, to have dinner all together. He likes her dishes, especially the Mansaf because she puts a lot of pine nuts in it.

“Daddy’s at work”, she replies, her voice always calm and reassuring. He never saw her angry, not even once. Not even last week, when everything happened.

Their house has a big living room, and this is another thing he likes. It is all white and light brown, and the windows are big enough to see the people walking outside if you get to have a glance through the tents. He likes to observe everything from there, sitting on the couch, because it almost feels like he can see everyone, without anyone being able to look at him, hidden behind a thin layer of white cotton.He feels like the invisible superhero of the cartoons he watches on TV.

Only Daddy knows and every time he comes back home from work he smiles at him through the window, knowing for sure he’ll be there. Then he enters through the front door and kisses Mommy on her forehead.

Last week Abir had to go to the market to buy napkins for him, because everybody at his school seemed to have the flu and he got sick as well. He couldn’t stop sniffing and his nose hurt and became red. He had been stuck on the sofa with a blanket and a hot chocolate all day, worst detention ever.

Mommy never leaves him alone, but she said it was only going to take a few minutes and she would be back from the market soon. He knows the market is only one street away from home, but in a different direction than Nanny’s place. He’s been there a couple of time with her. He really likes it because everything looks huge, he can run through the shelfs and they have a lot of candies, and Abir is always too soft and ends up buying some.

“Can you buy me candies? – he had asked that time – the ones that have a hundred colors and sugar on top”.

“No candies today, you’re ill”, she had replied. But he was sure she was going to bring them home.

She put her usual veil covering her hair and shoulders, gave a last glance at him and went out in the sun.

What he saw a few seconds later from the window was a man, bold and tall, wearing dirty workwear and coming from the opposite direction towards his Mommy. He started to shout at her, rising his big, fatty and dirty hands at her.

He couldn’t hear what he said, but he was obviously mad at her for doing something. He couldn’t even imagine what, because he had never seen Abir talking to him before. Then he saw the man getting closer and closer, his filthy hands shaking and getting closer to her until he hit her in the face, making her fall.

He could see the look on her face, when she glanced at the man with a hand on the face, just where he slapped her.

“Mommy!” he remembers himself screaming, even though at that point he knew nobody could hear him. He doesn’t even remember getting up from the sofa and running outside, the weakness gone from his bones. But the man was already gone, his dirty hands for ever impressed in his memories.

“Who was he?”, he could almost hear his voice, altered, different. It almost didn’t seem like him talking.

Abir shook her head, without looking at him.

He was grateful for that; he didn’t think he could’ve handled it. Everything was so overwhelming he felt useless. It was the first time that he saw his Mommy so tired, so powerless. He had always seen her as the most powerful creature in the world.

What he ate, drank, how he slept, how he dressed up, everything was her decision. How many times they went at the grocery store, the candies, dinner at Nanny’s, even skipping school was up to her.

But this wasn’t, not to her, not to Daddy, not to Nanny, not to anybody. Not even to him. He knew she was not going to be able to feel better on his own. The only thing he could do was watching.

Watching the skin on her cheek becoming more and more red as she got up.

Watching the tears dropping from her eyes, slipping on her cheekbones, stopping on her soft lips.

Watching her realizing he was in front of her, and quickly brushing the tears off her face with her arm.

“What are you doing outside, sweetheart?”. Her voice was calm, muffed, sweet, as if nothing happened. Her eyes were still full of tears, though. That was the only thing that allowed him to think he didn’t dream everything. “I had told you not to go out, you’re sick”.

Her face tried to open in a smile, but the pain transformed it in a smirk.

“Of course Mommy is okay, now go back in, or I won’t buy you candies”, she replied.

“I thought you said no candies…”

He remembers he started running, and his legs brought him on the couch again. Abir didn’t go back in, though. She just left, maybe to go to the market, or who knows where else.

Now, sitting beside the window again, he thinks at least on TV if you don’t want to see something you can change channel.

But there, there was no way of unseeing it.